It seems incredible that we are in October already, time really seems to fly by at a fantastic rate. It doesn’t seem like more than a few months ago that Microsoft released Windows 7 and it was only 5 minutes before that we had Windows Vista. Can it really be that we’ve now had Windows 7 for more than 3 years?

This month sees the release of Microsoft replacement for Windows 7 imaginatively named Windows 8. This version of Windows sees the biggest ever change in the Windows operating system, all previous versions have had slight cosmetic changes but have effectively all used the same interface consisting of a Desktop (main screen with icons) and a Start menu (listing all the programs).

Windows 8 changes all this, the Start menu is gone and does not exist, the desktop is now relegated to a background function and in comes a brand new interface. This new interface takes over entirely and consists of multi coloured squares of different sizes arranged in a grid covering the screen. This grid can consist of many pages and scrolls left to right (not up and down) if you have more items than fit on one page. The multi coloured squares can be different sizes and shapes (rectangles) and can contain pictures, email, text, content of the web and all sorts of other data and are dynamic meaning they can change their views. They can be used to start programs or apps, take you to email, or the internet and lots of other functions in a very similar way to icons. 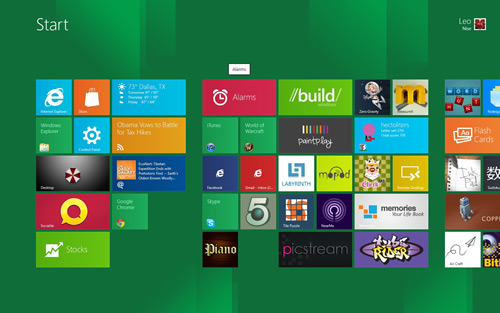 As well as this new tile layout there is a new way of controlling and changing settings called the Charms menu, this pops out from the right hand side of the screen when you move the mouse to the top or bottom right hand corner of the screen. Also gone is the task bar at the bottom of the screen telling you which programs are running, now a small image of the program appears in the top or bottom left of the screen when you move your mouse to the left corners and then a pop out bar appears showing the programs that are running. Using the corners of the screen to access these functions can be tricky when using a mouse or touchpad – I find it very fiddly and frustrating.

As well as this totally new interface and control system Microsoft have also significantly speeded Windows up,  it now starts in third of the time of Windows 7 and seems to run very well even on older computers (4 year old computer used for testing). The desktop is still there and can be accessed from a tile on the main screen, the look remains very much the same as the old desktop in Windows 7. There is now more information when undertaking tasks such as copying files or accessing the task manager, Windows explorer and other Windows screens now have the ribbon menu style as used in Microsoft Office (2007/2010 and soon to be 2013).

The most significant change to Windows 8 is that it’s been designed from the ground up to be controlled from a touch screen, we will very soon be seeing a Microsoft tablet (very similar style to the iPad) but running Windows 8. Unfortunately Microsoft in its efforts to produce a touch based system have forgotten that millions of people still use a mouse and keyboard and do not have touch screens. This means Windows 8 is not as easy to use or as nice as it should be for those using a mouse – things that are easy like gestures (swiping, pinch to zoom, etc) on a touch screen are very difficult on a mouse. Other features include cloud integration built in, better search function, better support for hardware and improved security.

Copying another Apple idea Windows 8 now sees an App store where you are expected to buy and download all software. Installing from other locations is locked by default but can be turned off allowing you to download from other places.

Windows 8 will be available on 26th October for the upgrade price of £24.99, its a download from the internet and will automatically upgrade any version of Windows including XP, Vista and Win 7. If you’ve bought a new computer in the last 5 months then you can upgrade for £14.99. The full retail versions are considerably more expensive, costs have not yet been announced but rumoured to be 200 dollars (160 Euros).

The BIG Question – Should you upgrade or not? If you are willing to give something new a try and are willing to learn a completely new system then go ahead. The testing and refinement has been quite extensive so Windows 8 is not going to be as much trouble as Windows Vista was. However you might be better to wait a while and see how the situation pans out. Not everyone is going to like Windows 8 in fact I would go as far as to say a lot of people are going to absolutely hate it.

I am somewhere in the middle I’m finding it very difficult to decide if I like it or not. I’ve been testing it for more than 6 moths, it has some very good features, it’s fast, responsive and reliable, but it’s also got a new interface which I am not sure about, the settings and options are much more difficult and its design as a touch based system leaves you at a disadvantage if you use a mouse/touchpad.

Could I work with it if it was installed on my computer – YES I could and I would get used to the new way of doing things very quickly.

Would I be as quick with Windows 8 as I am with Windows 7 – NO the new start menu screen is much slower to work with and the desktop keeps disappearing behind this new start screen.

So is it Trick or Treat from Microsoft – only time will tell?